Encased in a molybdenum-chrome frame, the Mercedes-Benz AMG 7.3 engine is able to spark off all of its 555 hp and 750 Nm torque, even during open top driving.

Encased in a molybdenum-chrome frame, the Mercedes-Benz AMG 7.3 engine is able to spark off all of its 555 hp and 750 Nm torque, even during open top driving. This result is mostly achieved thanks to the new central monocoque structure made entirely of carbon that allows optimum structural rigidity in terms of torsional and bending strength, for a dry weight of 1280 Kg. Elegantly appointed according to client’s demand, the Zonda Roadster allows the lucky owner to personalize each detail according to his/her taste, from the careful selection of materials, such as the aluminium and carbon fibre finishes, to the sophisticated and exclusive interior in fine leather entirely processed and hand-sewn by master artisans. The supercars are produced in a limited run of 40 units.

Officially known as the Zonda S 7.3 Roadster, the car promised no loss of performance from the coupe Zonda S. Under the hood, the Roadster had a 7.3-liter Mercedes-Benz AMG V12 capable of producing 555 horsepower and 553 pound-feet of torque, enough to propel the car from 0 to 62 mph in 3.7 seconds. This was an impressive feat for 2003, but it’s more pedestrian for today’s hypercars that can comfortably breach the three-second barrier.

Central to the Pagani is a carbon-fiber tub, which is then covered with body panels of the same material. Front and rear are lightweight metal subframes for the A-arm suspensions and the drivetrain. Mercedes-Benz’ AMG supplies the powerplant, a 7.3-liter V-12 with 555 bhp, 553 lb.-ft. of torque at 4000 rpm and a delightfully fierce howl that chases you around when you’re at full throttle. The gearbox is a 6-speed manual and the big Brembo brake discs come as steel or carbon ceramic. 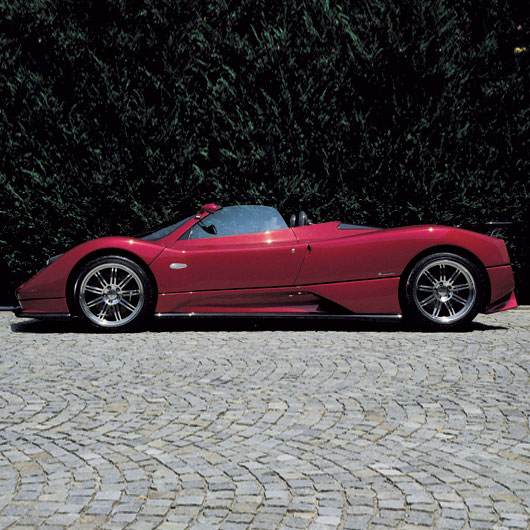