The new McLaren 765LT has a legend to live up to: Longtail. Every car that’s carried this name has been unique. Extreme and utterly focused around the driver. All about maximum engagement. Searing performance. Sensational handling. Being based on the incredible 720S, the latest LT has everything in its favour. A flying start. And it delivers on every level. Radically lightened and lower, the 765LT uses innovative aerodynamics to create 25% more downforce than the 720S.

Every Longtail is shaped by the spirit of rebellion. An obsession with going faster. Being better. Questioning everything and refusing to compromise. This extreme ethos inspires the design of the 765LT in every way. It’s all about purposeful aggression. You sense it in the elongated profile and lower stance. You see it in every beautifully engineered detail. Like the newly designed front splitter and bold side air intakes that invoke the legendary 675LT. A McLaren Senna-inspired carbon fibre front licence plate plinth celebrates McLaren motorsport DNA and total performance focus. Audacious attitude and functional quality also make the interior unique. Track ready and dramatically minimal, it surrounds you in lightweight Alcantara®. Deeply sculpted racing seats based on those found in the McLaren P1™ place you perfectly. A unique carbon fibre tunnel flows through the centre of the cabin.

Power means nothing in isolation. It needs to be deployed through a perfect balance of dynamic abilities. The 765LT harnesses and unleashes its huge power with visceral precision. A whole range of carbon fibre elements – from the front splitter to the new Longtail active rear wing – create 25% more downforce compared to the 720S. The specially engineered carbon fibre front floor helps to maintain this rock solid composure. Even when braking from high speed. Beneath its lightweight skin, the 765LT features ProActive Chassis Control II – complete with software and hardware updates. This is suspension technology for the outer limits – closer to the edge. Newly calibrated transmission subtly reduces the aggressive punch between gears if the car is nearing the limit of grip. Giving the driver extra control. Every innovation and revolution intensifies pure feel and total engagement.

Handling that rewrites the rules. Electrifies. Total connection between car and driver.
Everything important is enhanced by lightness. So extreme measures are used to cut weight. Every Longtail is defined by this uncompromising attitude. Which is why the 765LT weighs just 1,339kg. 80kg less than the lightweight McLaren 720S. The new, unique carbon fibre bodywork elements are incredibly light. The dramatic new all-titanium quad-exit exhaust system weighs just 10.9kg – 40% lighter than if it were made of steel. The whole interior is pared back to the LT essentials. And huge savings are achieved with the new ultra-light 10-spoke alloy wheels. Because they cut unsprung weight – which has so much influence on performance, handling and ride. Even glazing doesn’t escape the obsessive search for lightness. Thinner glass is used. And motorsport derived polycarbonate.

765PS. Enough power to change the game. To make history. Because the 765LT is the most powerful LT model ever. It raises the bar. And rewrites the rules. The McLaren -designed 4.0 litre twin-turbocharged V8 produces 45PS more than the mighty 720S. A number that sounds far less shocking than it feels. But in a 1,339kg car with such singular, obsessive purpose you quickly leave the numbers behind. Nothing prepares you for the feeling. Intoxicating, focused power. Delivered with emphatic, savage precision. Deep reserves of torque help to make the 765LT tractable, flexible, ultimately usable. 800Nm from 5,500rpm to be precise. But this is about much more than numbers. 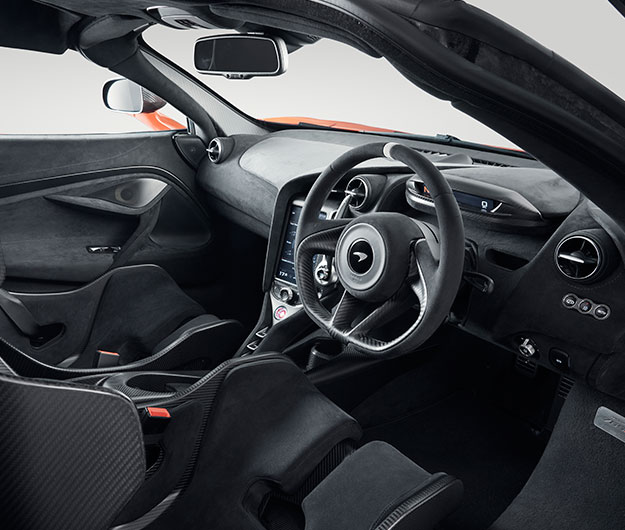