Dramatic new exterior and interior design hint at the astonishing performance of the McLaren 675LT.

Advanced race-proven technology delivers a thrill like no other.

Not only does the exterior design of the 675LT create maximum visual impact, but it also helps unleash its staggering performance. The race-inspired front splitter is now 80 percent larger and the distinctive rear ‘Longtail’ Airbrake’s aspect ratio increased by some 50 percent; both additions help increase downforce by an incredible 40 percent compared with the already efficient 650S. The unprecedented use of carbon fibre for a car in this class – including both new bumpers, and the entirely redesigned rear fenders and rear deck – also contributes to a substantial 100kg overall weight saving; a 1230kg dry weight makes the 675LT lighter than all class competitors, and gives an astonishing power-to-weight ratio of 549PS per tonne.

Inside, the performance-focused, weight-optimised design continues. Carpet has been removed revealing the carbon fibre MonoCell at the heart of the 675LT. Comfortable yet purposeful racing seats save 15kg, while larger rocker shift gear controls inspired by the McLaren P1™ underline the performance credentials of the 675LT.

We have over 50 years of success on the racetrack, and those decades of expertise feed directly into all our road cars. The 675LT is no exception. Inspired by the 1997 McLaren F1 GTR ‘Longtail’, it deploys motorsport-developed technology to create the most extreme driving experience of any McLaren series-production supercar.

The 675LT has been extensively optimised within the in-house wind tunnel at the McLaren Technology Centre, an astonishingly potent race-proven engine produces 675PS (666bhp) and 700Nm (516lb ft), and the suspension system has been engineered for even sharper responses.

Long associated with an uncompromising motorsport ethos, lightweight Alcantara is offered as standard equipment throughout the interior. Durable, high-grip and incredibly tactile, Alcantara features across the cabin, including the racing seats, dashboard and steering wheel. Carbon fibre trim provides an ideal contrast to this high-tech upholstery, and features a satin-lacquered finish to reduce weight and generate maximum visual impact.

The 675LT’s engineers have left no stone unturned in the quest to save weight and heighten driver engagement. Even the air-conditioning system, for instance, has been removed to save a further 11.5kg, but can be specified as a no-cost option if desired. Elsewhere, the climate controls previously located on the armrests have been removed altogether to reduce complexity and weight; the driver now controls these settings via the central touchscreen. 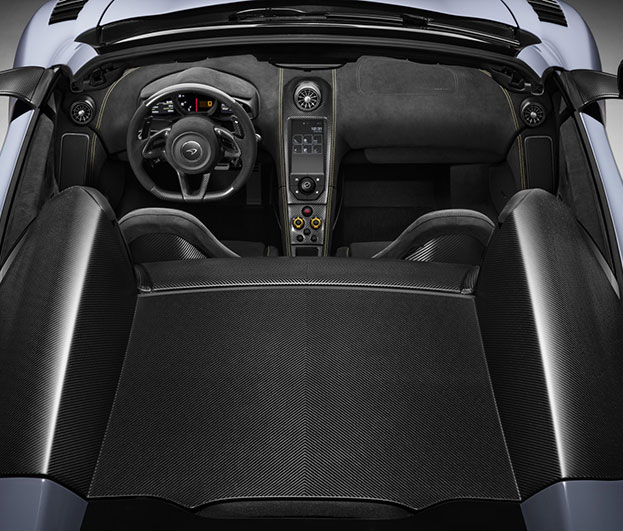