Every time you approach your McLaren 650S, you’ll feel the same tingle of excitement as when you first set eyes on it. Every panel, every surface, every detail has been painstakingly designed to take your breath away and enhance the thrill of the drive.

Every millimetre of the McLaren 650S’s Carbon Black Alcantara interior has been meticulously optimised for maximum driving pleasure and unparalleled comfort.

Simple. Effective. Undeniably spectacular. Our signature dihedral doors, first seen on the McLaren F1, are lighter and more aerodynamic than conventional doors. They are also more practical as the single hinge design requires less room to open and makes it much easier to get in and out the cabin.

Now available in carbon fibre, the active Airbrake gives you total confidence to exploit the McLaren 650S’s astounding performance and dynamics. Brake heavily above 95kph and the McLaren 650S’s active Airbrake instantly deploys, meaning you can stop faster and brake even later on the racetrack. It also offsets front-end pitch and increases downforce under hard braking to maximise stability.

We pioneered the use of carbon fibre in Formula 1 and in production road cars. For over 30 years, every car we have made has had carbon fibre at its core.

It took 4,000 hours to make each carbon fibre chassis on the McLaren F1. Twenty years of innovation later, it takes just four hours to produce the MonoCell that makes the McLaren 650S feel so special.

Grip the tactile, small-diameter steering wheel and your fingertips’ sense of connection to the McLaren 650S echoes that of our racing drivers in a Formula 1™ cockpit – the shape, the grip and the feel were all inspired by the steering wheels in our race cars. There are no buttons or switches to diminish the purity of interaction between man and machine.

How the suspension connects you to the road, how quickly the gearshifts react to your inputs, even the volume of the 3.8-litre twin-turbo V8… ADP’s Normal, Sport and Track modes allow you to tailor the McLaren 650S to your ideal driving preferences. Refined cruiser one minute, track-day thrill-seeker the next. 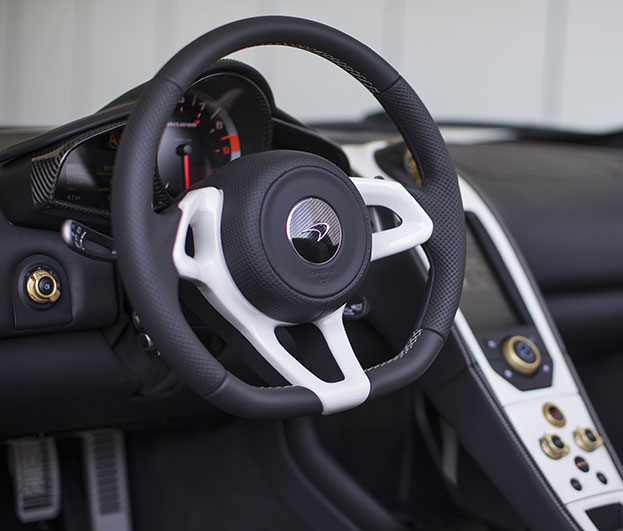