The Ferrari Monza SP1, together with the Ferrari Monza SP2, are the forerunners in a new concept, known as ‘Icona’ (Icon), that taps into a leitmotif of the most evocative cars in the company’s history to create a new segment of special limited series cars for clients and collectors. The intention is to use a modern aesthetic to reinterpret a timeless style, with technologically advanced components and the highest performance possible through continuous innovation.

Racing has always greatly influenced Ferrari design language and the Ferrari Monza SP1 is linked to the marque’s glorious past by an invisible bond. Its design, in fact, embodies the elegance, performance and innovation that are such an intrinsic part of Ferrari’s past and present. From the point of view of pure creativity, the seductive images of 1950s Ferrari barchettas, that evoke in so many ways the atmosphere of the races of the day, were an invaluable source of inspiration. The Ferrari Styling Centre’s designers gave the barchetta concept an absolutely modern connotation thanks a new and highly personal take on the theme. But there are no nostalgic references, no elements borrowed directly from the past. A car that seems sculpted by the wind. It is the purity of the styling elements that impresses – an aesthetic that is futuristic but, at the same time, a respectful yet un-nostalgic homage to the past.

Amongst these is a 350 bar direct injection system for the very first time on a high-performance petrol engine paired with variable geometry intake tracts conceptually derived from those of naturally-aspirated F1 engines. Particular attention was also paid to calibrating the performance strategies to enhance the engine’s potential and the sensation of extreme power delivered by the car while ensuring the driver can easily dose the massive torque available, thanks to smooth, progressive power delivery at all engine speeds. Thanks to the uncompromising open configuration, the V12 sound is even more all-enveloping. The more noticeable intake sound is captivating and absolutely unmistakable. The driver feels completely immersed in an incomparable experience that only a car brimming with Ferrari DNA could deliver. The engine in the Ferrari Monza SP2 is derived directly from that of the 812 Superfast, with optimised fluid-dynamics in the intake ducts to deliver even higher performance.

The Virtual Wind Shield is essentially an aerodynamic passage underneath the driver’s side aero screen, where the upper part is shaped as an aerofoil. Part of the air flowing over the bonnet enters the air intake under the aero screen, where it is accelerated and deflected vertically ahead of the instrument panel. This generates what is known as a highly energised upwash that deflects the flow over the driver’s head creating a low-speed bubble around the cockpit. The result is that the model is perfectly balanced with no roll whatsoever for almost unimaginably pure, uncompromising sports-car handling. Because there are no windscreen pillars, the driver’s view is completely unhindered and this enables them to attack corners with a freedom only experience with a Formula 1 car. The Virtual Wind Shield was patented for this car in response to the need to allow the driver enjoy it at high speeds. Although it remains below the driver’s cone of vision, it delivers maximum driving comfort for a barchetta. 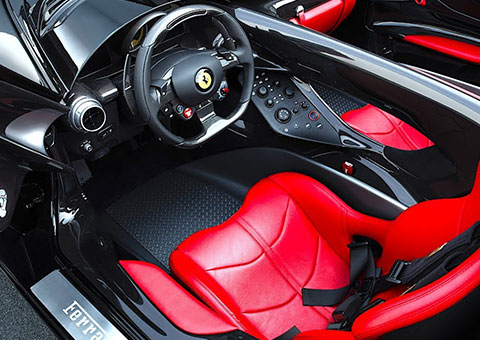