The aim in developing the 812 GTS was to retain the exhilarating feeling of speed and power delivered by the berlinetta version in terms of accelerating, response times and agility. Exactly 50 years on from the debut of the last spider in the Ferrari range to sport a front-mounted V12, the 812 GTS hails a triumphant return for a model type that has played a pivotal role in the marque’s history since its foundation.

The retractable hard top (RHT), which opens in just 14 seconds at speeds of up to 28 mph, does not impinge upon the interior dimensions, thus maintaining the donor car’s roomy cockpit. The electric rear screen, which acts as a wind-stop, makes the car truly useable with the top down while, with the top up, it can be left open to allow occupants to continue to luxuriate in the naturally-aspirated V12’s unique soundtrack.

The 812 GTS is the spider version of the 812 Superfast, from which it takes both its specifications and performance, most notably the power unit which, thanks to its ability to unleash a massive 800 cv at 8500 rpm, is the most powerful engine in its class. As on the 812 Superfast, these performance levels were achieved in part by optimising the engine design and in part by innovations, such as the use of a 350 bar direct injection system, and the control system for the variable geometry inlet tracts, developed on naturally-aspirated F1 engines. These systems allowed the increase in displacement from 6.2 to 6.5 litres to be exploited to maximise power output whilst retaining excellent pick-up even at low revs.

Meticulously detailed work went into guaranteeing an excellent standard of comfort on-board with the top down. There was huge focus on minimising both turbulence inside the cabin and aerodynamic noise to ensure occupants could converse undisturbed even at high speeds. As with the LaFerrari Aperta, two small L-shaped flaps on the upper corners of the windscreen generate a coherent concentrated vortex that creates outwash in the velocity field immediately above the rear screen, thereby avoiding excess pressure behind the occupants’ heads. 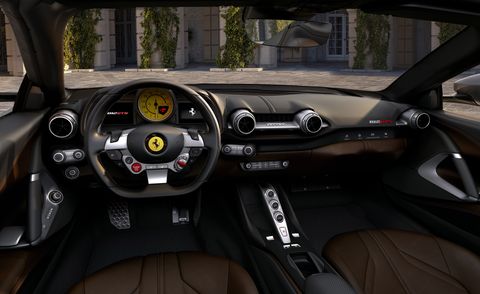